5 Year Old Girl Expelled From School For Having Two Moms 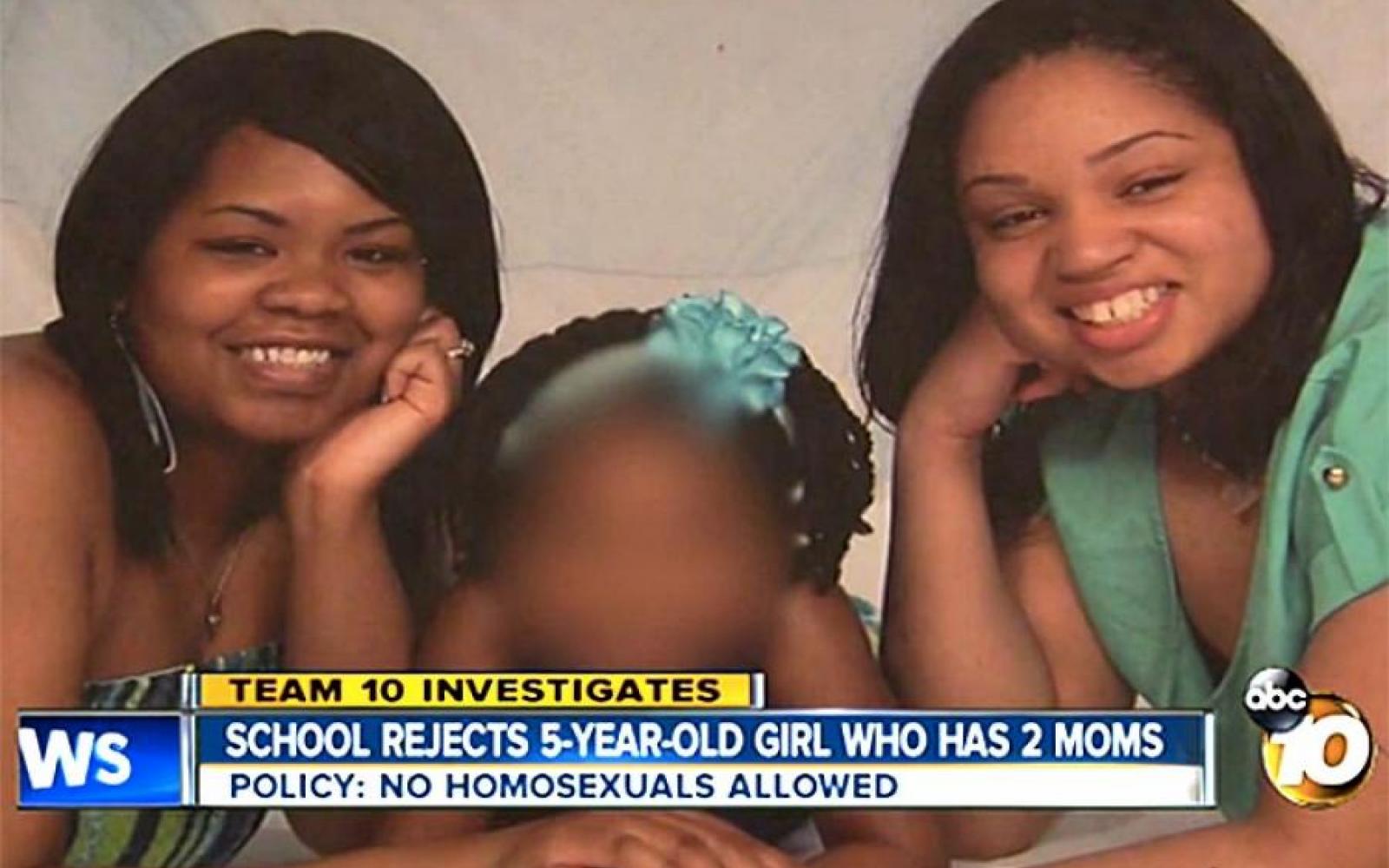 A five-year old girl is at the center of a fight that pits freedom of religion against nondiscrimination rights.

It's a fight that some say could wind up in the U.S. Supreme Court in the near future.

Those were the words of a little girl, who sat in front of a coffee table drawing pictures of her family instead of sitting in a kindergarten classroom at Mt. Erie Christian Academy with her peers.

The girl learned a few days before school started that she was no longer welcome at the place where she had attended both preschool and summer school. The reason, according to one of her mothers, is the school doesn't want anything to do with homosexuals.

"They told us, ‘oh this is not about your child,’ but it is about my child," said Sheena, who asked 10News not to use her last name.

Sheena is a stay-at-home mom. Her wife, Lashaune, is in the Navy and is now away on deployment.

"If we knew from the beginning that this was unacceptable, they didn't condone or believe in this, if it was such a big deal, we would have never started her off there," Sheena said. "I would never put my child's emotional wellbeing in an unstable setting like that."

Sheena told Team 10 she and her wife were summoned to the school the Friday before Labor Day, where they were shown to a room to meet with the pastor. After a prayer, Sheena said the pastor dropped the bombshell.

"It was heartbreaking,” Sheena said. “I didn't finish the conversation with them when they took us in the room because I just, I didn't want to look at them any longer. I just couldn't believe that they did that."

Now the mothers are looking for an attorney to file a civil rights lawsuit against the school.

A woman, who only gave the name "Kailyn" and described herself as the director of Mt. Erie, told Team 10 the school has a non-discrimination policy. When asked whether it was discrimination to bar the 5-year old from attending kindergarten because her parents are lesbians, Kailyn responded: "The Bible says homosexuality is a sin. We don't condone any sinful lifestyles."

Sheena provided Team 10 with a copy of the school's parent and student handbook, which was revised in June 2015. On page four, right after the statement of nondiscrimination it reads:
“Mt. Erie Christian Academy is a religious, Bible-believing institution providing education in a distinct Christian environment, and it believes that its biblical role is to work in conjunction with the home to mold students to be Christ like. On those occasions in which the atmosphere or conduct within a particular home is counter to or in opposition to the biblical lifestyle that the school teaches, the school reserves the right, within its sole discretion, to refuse admission of an applicant or to discontinue enrollment of a student. This includes, but is not necessarily limited to, living in, condoning or supporting sexual immorality; practicing homosexual lifestyle or alternative gender identity; promoting such practices; or otherwise having the inability to support the moral principles of the school (Leviticus 20:13a; Romans 1:21-27; Matthew 19:4-6; I Corinthians 6:9-20).”
On page 14 of the handbook under the section entitled VALUES, it reads:

“MECA seeks to: Teach students the importance of loving and respecting each other, because all people are valuable in God's eyes, regardless of physical, social, economic, ethnic, or other factors.”

Sheena said her family is loving and respectful. The fact that there are two moms isn't unusual.

"What does our family life have to do with anyone else? Like no one's gonna be in danger."

Team 10 reached out to the ACLU, the LGBT Center and San Diego Pride. None of the groups were willing to speak on the topic. An administrator at Pride said, "It is what it is."

"Religions and religious institutions, that do not in their activity receive public money, have the right to discriminate on the basis of sexual orientation if that is part of their religious tradition," Iredale said.

According to filings with the federal government, Mt. Erie does not receive any public funds.

Iredale said both California and federal cases have upheld the right of private institutions to bar membership based on religious beliefs. That is exactly the opposite of discrimination laws that pertain to publicly-funded programs and businesses that cater to the general public.

"Now the question is where do you draw the line?” Iredale asked. “If you have a religion that believed in human sacrifice or amputation of the arm or the hand for theft, would we permit that in the interest of permitting the free practice of one's religion? I don't think so, and one could argue that psychologically… this is as devastating to the little 5-year-old girl as some of those other vicious practices."

Iredale said he believes that in the next five to 10 years, the U.S. Supreme Court will have to decide a case like the one involving Mt. Erie because of changing public policy regarding homosexuality.

Sheena said she's ready to fight for it.

"I want my baby to be safe when she grows up. I don't want her to ever have to be discriminated against because of her lifestyle. That's not fair."

Meanwhile, her daughter waits to be accepted to a new kindergarten.

Team 10 reached out to the National Center for Lesbian Rights.

"This type of policy is out of touch with reality," said Cathy Sakimura, deputy director and family law director for the NCLR.

Sakimura said barring Sheena's daughter from school could create a culture of fear among children at the school, allowing children to think it’s not OK to be LGBT or divorced. She hopes the Mt. Erie situation will start an important conversation within the church community, one that leans toward better acceptance. She said many parents within the church and school community may be ready to change the policies to better reflect that.