Instead Of Coming Out, Andrew Gillum Says He "Cried Every Night" After Being Caught With Male Escort 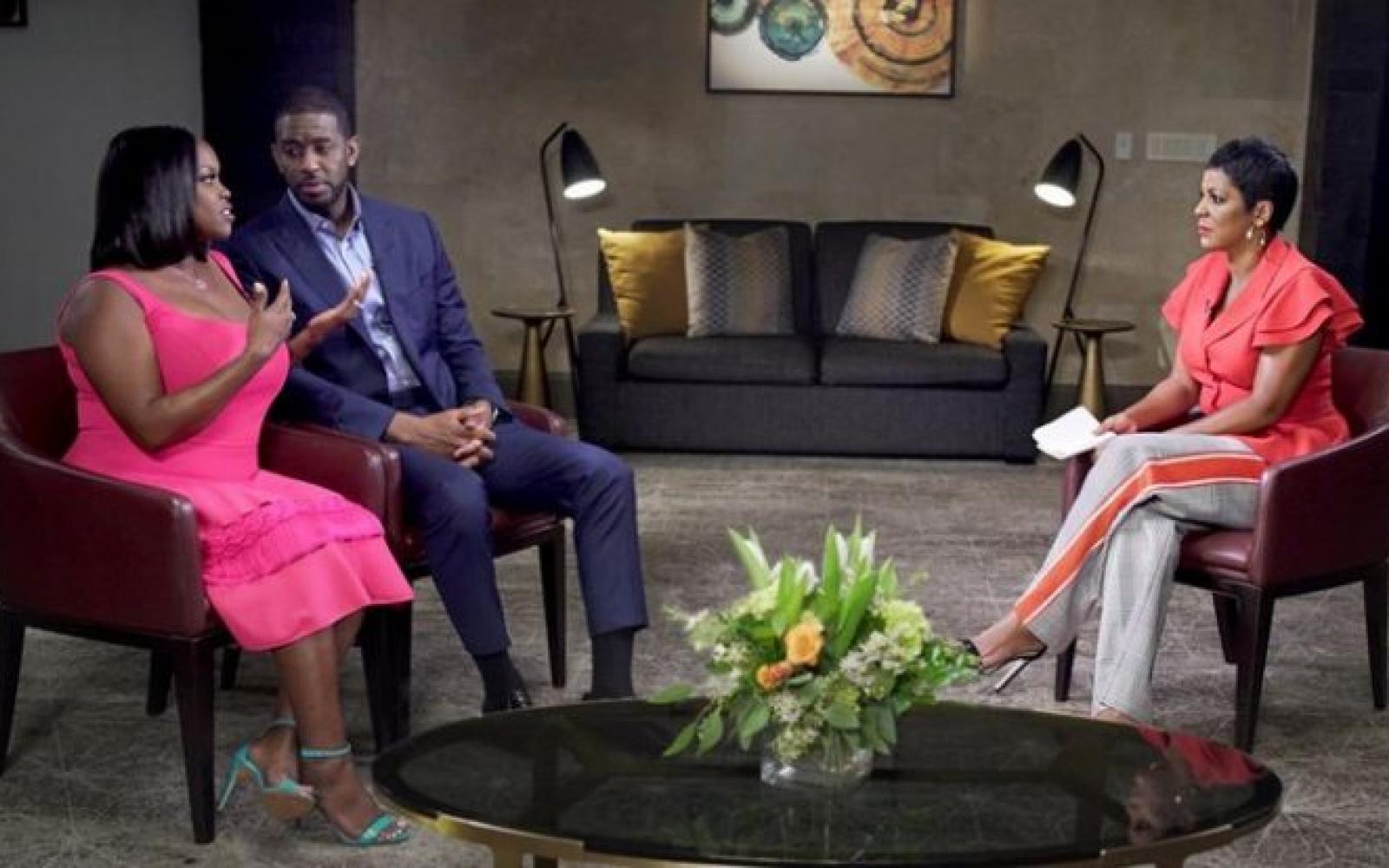 Tamron Hall says her interview with former Florida gubernatorial candidate Andrew Gillum and his wife that was "one of the most difficult" in her 27-year career as a journalist.

Gillum and his wife, R. Jai Gillum, sat down with Hall for their first interview since the Florida politician was caught in the middle of a scandal in March that led to him to enter rehab and therapy and retreat from his once-promising career.

The sit-down interview will air during Tamron Hall's second season premiere on Monday. An exclusive clip was shared with PEOPLE, above.

"It was intense, and at moments it was heartbreaking, upsetting and it was disorienting," Hall, 49, tells PEOPLE. "I’m only there because they’ve agreed, but I still felt like I was prying. They agreed to talk with me, but as a journalist there’s moments where you wonder: How far are we really supposed to go?"

Gillum, who narrowly lost Florida's 2018 gubernatorial race to now-Gov. Ron DeSantis by 32,000 votes, made headlines this spring when he was found drunk in a hotel room with another man who may have overdosed on drugs and was treated by responders, according to local police.

Gillum, 41, said then that he "had too much to drink" but had not taken meth, which authorities suspect was in the room with the men. The other man identified himself as an escort through the website Rent Men, according to a local TV news article. He told the Miami New Times that he and Gillum had been “friends for a while.”

Photos from the scene also circulated in corners of the internet, including one of an unconscious Gillum "on the floor ... literally lying in my own vomit," as he told Hall.

After news of the incident spread, Gillum announced he would be stepping back in order to “seek help, guidance and enter a rehabilitation facility.”

Now, for the first time, the former mayor of Tallahassee and his wife are talking about the situation and his recovery.

“It’s one of the most difficult interviews I’ve ever conducted because you have someone who — the level of shame that he is feeling, the level of heartbreak and humiliation that his wife has been exposed to, reaches a depth of pain that I cannot imagine," Hall says.

“The truth is, is that, Tamron, everyone believes the absolute worst about that day," Gillum tells Hall. "At this stage I don't have anything else to have to conceal. I literally got broken down to my most bare place, to the place where I wasn't even sure that I wanted to live. Not because of what I had done, but because of everything that was being said about me.”

Gillum says that he has cried "every day" since the incident.

According to a police report obtained by The Miami New Times in March, Miami Beach officers arrived to the Mondrian South Beach hotel on a Friday night that month and found Gillum in a room with Travis Dyson, who was being treated by emergency responders for a “possible drug overdose.” The police report stated that officers found three bags of what they suspected to be crystal meth on the bed and on the floor of the room.

Authorities told PEOPLE at the time that the incident was not being treated as a criminal matter and Gillum was not charged with any crime.

He said this summer on social media that he was "working" on himself in recovery and taking time to "deal with some issues I was having," including alcoholism.

"I had totally underestimated the impact that losing the race for governor had had on my life and on the way those impacts started to show up in every aspect of my life," Gillum said in an Instagram video in July.

Hall, who co-hosted the Today show for three years before leaving NBC in 2017, says she first reached out to Gillum after she heard about the hotel scandal on social media.

Eventually, he and R. Jai agreed to a joint interview after weeks of texting about how the conversation would take place.

"He and his wife had refused many, many requests from so many shows — both news and entertainment," Hall says. "I think what the breakthrough was, at least what they told me, was that I wanted her to be a major part of the story, not just the spouse on the side meant to prop you up or meant to shield you from the incoming criticism, but what’s your story as well?"

Hall says R. Jai is "tough as nails" and "defiant" during the interview, saying R. Jai tells her she doesn't want the incident to define their marriage.

As for details of the conversation, Hall says that Gillum and his wife "addressed it all."

"They went into great detail on their history, on their marriage, on what R. Jai described as their 'personal covenant,' " she says, adding that "a grenade went of inside their marriage and inside their lives" and that she doesn't believe they know yet what the future holds for Gillum.

The politician was seen as a rising star in the Democratic Party who received an endorsement from President Barack Obama during the 2018 race.

Gillum has stepped back from politics since March, though he has still used social media to show support for Democratic nominee Joe Biden in the general election.

"We discussed that: Can he return to politics? Does he even want to?" Hall says. "We know that on both sides of the isle, politicians have returned from scandals that people were certain would end it all for them. I think with Andrew he’s first focused on his children, his wife, and his career is very important to him."