Tyra Sanchez Drags RuPaul, WOW For Their Black Lives Matter Posts "You've Been Silent To The Mistreatment of Black Queens" 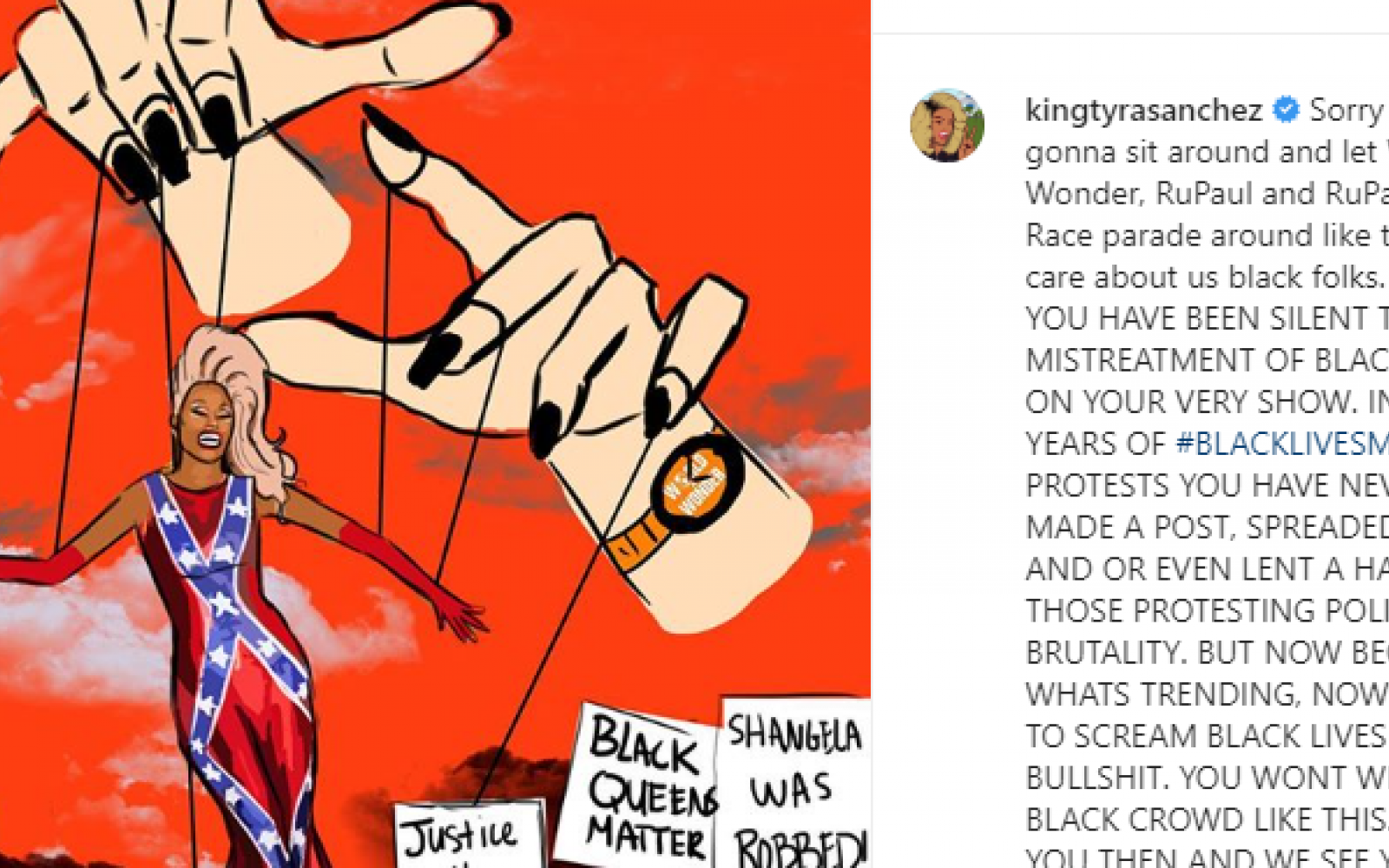 Tyra Sanchez  has a bone to pick with RuPaul and the production company World of Wonder aka WOW over their black lives matter and police brutality posts, saying for years they've ignored the mistreatment of black queens on Drag Race.

Sorry I’m not just gonna sit around and let World of Wonder, RuPaul and RuPaul’s Drag Race parade around like they truly care about us black folks. FOR YEARS YOU HAVE BEEN SILENT TO THE MISTREATMENT OF BLACK QUEENS ON YOUR VERY SHOW. IN ALL THE YEARS OF #BLACKLIVESMATTER PROTESTS YOU HAVE NEVER ONCE MADE A POST, SPREADED THE WORD AND OR EVEN LENT A HAND TO THOSE PROTESTING POLICE BRUTALITY. BUT NOW BECAUSE ITS WHATS TRENDING, NOW YOU WANT TO SCREAM BLACK LIVES MATTER. BULLSHIT. YOU WONT WIN BACK THE BLACK CROWD LIKE THIS. WE SAW YOU THEN AND WE SEE YOU NOW. YOU DONT GIVE A SHIT ABOUT US, YOU’RE SIMPLY JUMPING ON THE BANDWAGON TO MAKE YOURSELVES APPEAR TO BE SUPPORTIVE. WE KNOW THE REAL YOU.

This wouldn't be the first time black queens spoke out about how the show and the fans treat black queens.  During the season 9 reunion black queens complained that Valentina and  the show remained quiet while racists fans attacked them online.

The show has also been called out for its lack of diversity back stage, most famously byEssense Magazine after Drag Race's Emmy Win.

When RuPaul and his staff came backstage to the Emmys press room, ESSENCE boldly asked him how he felt about the lack of diversity on the RuPaul’s Drag Race staff.

We asked, “As someone who represents so strongly for the LGBT+ community… Do you feel like it’s important for that to be represented behind the scenes as well?”

RuPaul responded—first, by interrupting, then, by cracking a cringe-worthy “BLT” joke. “I love myself some bacon, lettuce, tomato,” the icon said with a giggle.

He then reiterated that he is a Black, gay man who is also a drag queen. “Check, check and check,” he said as if checking off boxes on a diversity and inclusion survey. RuPaul then looked around the stage at the people who stood with him—as they looked around at each other, seemingly confused by the question—and proclaimed that there were “lots of different types of people.”

He then finished by glossing over his own struggles of reaching success and flopped an infamous quote from Miss Sophia (Oprah Winfrey) in The Color Purple: “All my life I had to fight.”